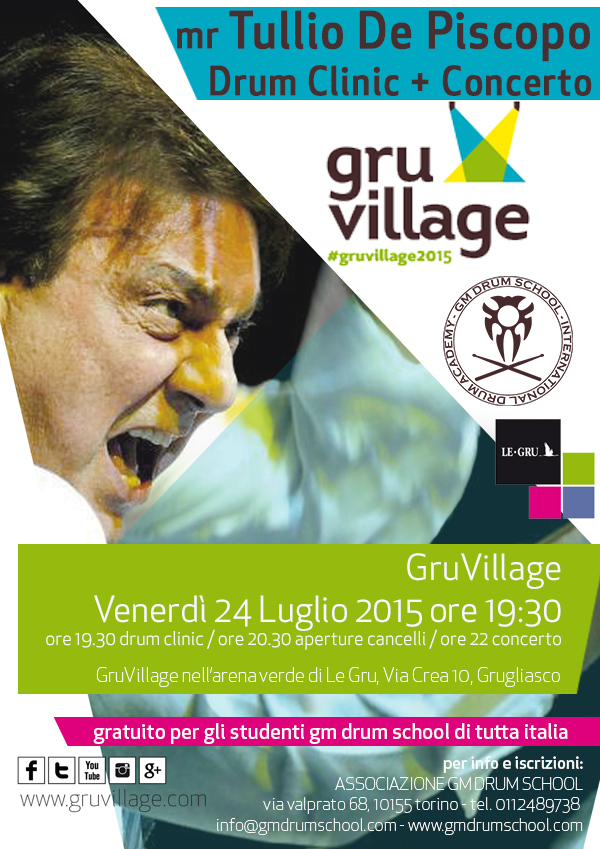 "Madam, would you tell me the name of an Italian drummer?"
The answer to this question posed to a lady who has just left a supermarket, a person absolutely outside the professional music scene, is obvious.
But far from obvious is the character we're about to talk to you about.
Known to the general public for his performances as drummer of the Grande Pino Daniele, recently passed away, and for his Pop songs that have climbed the hit parade a few years ago, first of all the resounding single "Slow Trend", Maestro Tullio De Piscopo is anything but a mere popular phenomenon.
We are talking about a world-class musician who has nothing to envy to the great drummers who have made the history of international jazz and who belong to the aristocracy of the drums… with an extra gear if we are allowed…
Because Mr De Piscopo is an Italian professional with a capital P, someone who has played EVERY musical genre in every situation and in any context. From Balera to the big stadiums. Not all the greats of the battery had to make such a rough road and managed to do so with the skill and verve of Master Tullius.
Mr De Piscopo is someone who starting from scratch in a nation where drums was not even an instrument contemplated by the official educational institutions managed to play with some of the world's greatest artists, wrote musical methods on the one of the best-selling instruments in Italy, and finally made the image of the battery captivating for millions of Italians.
What else to say… GM Drum School is honored to announce in Partnership with GruVillage the Clinic and the concert of Mr Tullio De Piscopo Friday, July 24, 2015.
The clinic will take place on Friday 24 July 2015 at 19:30 at the green arena of Le Gru via Crea 10 in Grugliasco.
For 10 years in the service of the community by presenting world-class shows at ultra-popular prices, Le Gru with its 12 million annual visitors is a very important and highly important partner that we thank very much for the support in the popularize good music and quality teaching.
The clinic will have the title:
HOW TO PREPARE A DRUM FOR A BIG CONCERT
Following the concert of the Great Neapolitan Artist who with his orchestra will perform songs ranging from Jazz, To Latin Music, to Music with African influences, to quality Pop.
The clinic and the concert will be free for GM Drum School enrollees from every part of Italy, and to enter you will just have to show the school registration card bearing your name. You will not be able to attend the concert only unless you have attended the Clinic during which the free admission ticket for the concert will be officialized.
We're all waiting for you!