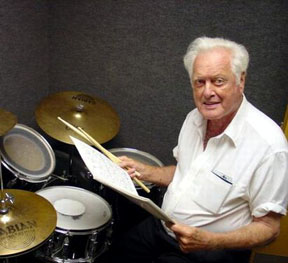 On February 17, Dom Famularo, the Chapin family and some of the biggest names in the music industry will launch the Jim Chapin Memorial Teacher Scholarship at the famed Hard Rock Café in New York City. The event, which celebrates the legacy of one of drumming’s most dedicated and influential legends, will feature Famularo as master of ceremonies and will include performances by some of today’s leading drummers, along with music by members of the Chapin family (Tom, Jen, Steve, Abigail, Lily, David and Paul Chapin).Mr. Chapin, who passed away on July 4, 2009, just shy of his 90th birthday, was known as the “Father of Independence”, due in a large part to the revolutionary book he published in 1948 entitled Advanced Techniques for the Modern Drummer, Vol. I. Still in print today, it became known among drummers simply as “The Chapin Book” and is arguably the most important drum set text ever written. In 1994, Mr. Chapin received two honors for his contributions to music and education: the American Eagle Award, presented by the National Music Council in Washington, DC and a lifetime achievement award from the Berklee College of Music in Boston. And in 1995, he was inducted into the Percussive Arts Society Hall of Fame.

The Jim Chapin Memorial Teacher Scholarship will be given annually, beginning in 2010, and is open to instructors that want to improve their teaching programs. Specific details on how and when to apply will be disseminated in the near future.

Said Famularo, a student and friend of the late drumming icon: “Jim was a one-of-a-kind person and player. He was committed to learning the art of modern drumming and giving that knowledge away. He always had his sticks with him, ready to teach anyone who wanted to know anything about drumming. Jim was all about sharing and the memorial event and scholarship will guarantee that his legacy continues.”

The Jim Chapin Memorial Teacher Scholarship will be maintained by the Percussive Arts Society (PAS). Contributions can be made at the February 17 event and any other time by check payable to PAS/Jim Chapin Scholarship or online.