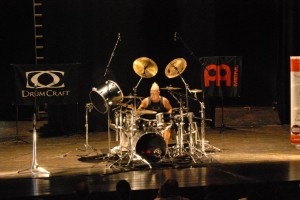 Once again, Gm Drumschool Sardinia, the island's first battery school, is running a major event in honor of the opening of the academic year,
offering its students and drum fans the chance to witness the clinic of a great drummer and showman of the international rock scene: Mike Terrana.

The clinic was held at the Pirri Vetreria Theatre on Sunday, September 11.
Mike performed for two hours, delighting the audience with the pieces from "Symphonic", his album containing11 famous pieces of classical music (from Mozart to Tchai 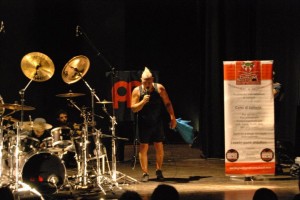 Rossini) accompanied by his energetic and explosive drumming. For Gm it was another success and a great satisfaction for its professors: Raphael Saini, Alessandro Picciau, Daniele Russo, Efisio Pregio and Nicola Salis who thanks to their passion and their dedication are allowing young musicians to be able to know and see their myths in action.