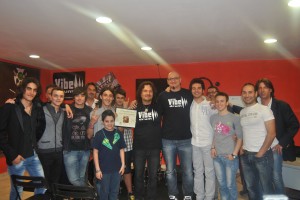 If you wanted to know the secrets of the technique and style that led the master Gigi Morello to be one of the most appreciated drummers in the music scene, you would have had the chance to participate in the unforgettable Masterclass that the President GM Drum School Italy held on Saturday, May 18th at gm Drum School Lazio in Frosinone.

Coordination, independence, styles, dynamics and practical exercises that allowed Master Morello to give valuable tips to achieve a degree of higher level affinity with the instrument. Two hours of performances interspersed with lively exchanges between the drummer and the students who satisfied their every curiosity. The children put themselves to the test under the attentive gaze of the Master who, involving them in the first person, made sure that each of them could treasure this unique experience.

On this occasion, Gm Lazio also had the opportunity to award Director Morello the recognition of Honorary Member for:

"his great and always passionate commitment to the dissemination and promotion of the study of the battery and for the special support, never failed, dedicated to the GM DRUM SCHOOL LAZIO"

If you lost this first meeting, don't worry. The Christian Courage Master announced yesterday the beginning of the Long Distance course on the technique that will be held at the GM of Frosinone by Master Morello himself. The course will run quarterly from September and will include the release of the valid attendance title for the purpose of reaching the credits for the final diploma.

We thank all those who spoke and in particular the Masters Gigi Morello and Cristiano Coraggio for organizing an extraordinary cultural and musical event open to all lovers of drums.