IVAN GHELLER – LEAVES US ONE OF US

A man, a drummer, a musician like many, like none.
Ivan Gheller still leaves us at a young age, less than 60 years old, because of an incurable disease.
Ivan left this body last Saturday, June 2, 2012, in his Venaria Reale, the first suburb of Turin.
Discreetly he goes away, almost muted, mute as he used to get to the events of the drummers he often frequented. Two words at the end to comment on a fill, a groove, the sympathy or behavior of the musician in question, and then fall back into his life.
An educated drummer, a lover of good rhythm in rock and pop music, loved to interpret the songs of Vasco and other Italian artists, after playing prog for several years and "getting tired".
For those who knew him better than I did, my drummer friends Tony Ricciardi and Max Gordiani, Ivan was an eclectic character, particular, not without a certain English humor.
I also met him in another capacity, the counterpart of the artist not properly "professional" (only for the fact that he had another source of income) that also in his work inserts that dowry inserted into his soul even in the profession that gives him bread.

Ivan was an excellent decorator and after decorating Tony's little room in GM and after suggesting it in decorating my fiancée's house was naturally noticed and also decorated the house of my girlfriend's sister and then mom…. He was good, he wasn't a painter, with nothing to take away from the painters. He worked with his brother Gianfranco, who I met briefly at the funeral, destroyed by grief.
Art has different facets but each of them has to do with doing something by putting love and passion into it.
Ivan was an artist.
They waited for him in July to do some more work in their homes in need of art and love. Which house isn't?
They too were shocked by the bad news. A drummer-decorator, a man who with his art left a mark in the hearts of the people who crossed him.
Discreet, yes, it was hard even to find out where he had ended up, tracking down on the internet the contact of his brother who sent Tony back to the hospital where Ivan was in hospital. Ivan hadn't told anyone he had a few months to live. He was no longer answering his phone.
Even with us who magically paraded in front of his uninvited deathbed he says he has "an infection" and we patiently pretend to believe it, a dumb agreement of people who do not want to violate his desire to maintain a demeanour and not be made crying On. More than understandable but not easy to do. Not everyone can.
"He should vent and cry, it would be good for him" says the nurse in charge of Ivan with whom we talk, maybe yes, but the fact of living his illness without complaining and without seeking compassion does not now seem a stupid choice, but a choice that few brave people succeed to undertake.
"When you're sick you really realize how much some things really don't matter," he tells me when he sees me with his arm broken, I agree, i've never agreed more on something before.
For Max Gordiani who several times since that day goes to visit him are discussions about music, listening to more or less portentous drummers and engaging music, never a nod to his incurable evil that insists.
Then the news. 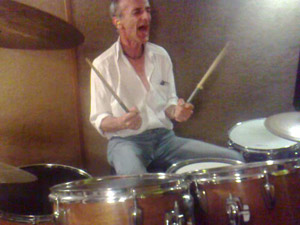 At the funeral Brother Gianfranco, family and friends and the two daughters that Ivan leaves. A group of alpine conscripts in uniform and with banners present us with another aspect that we did not know about Ivan. Before tumuular is asked if anyone wants to say something. We wonder if anyone had put chopsticks in his coffin, "because Ivan was a drummer." Max lends his and adds a stick that is promptly secured along with the same on the lid of the coffin, above the brass cross. Max is the person who was closest to Ivan at the end.
Strange to see someone leaving this world.
It's more than natural, sooner or later it's everyone's turn but for some strange reason we can't get used to it.
Perhaps because our immortal soul refuses to say that when your body ceases to be able to move and breathe everything is over.
Maybe because it's not true.
Have a good trip Ivan.
G – friends of the Drum School

TONY RICCIARDI
I will always remember with pleasure and affection our musical evenings based on the study of drums, the many seminars seen together, the Turin MARATHON, all the bacterial events organized by Gm Drum School and your concerts covers by Vasco Rossi. Keep laughing at what made you laugh, those little things and the pleasant cheerful evenings they spent together. Hello Ivan you will continue to live in the hearts of those who loved you. Rest in peace.
Tony Ricciardi

GORDIAN MAX
I remember, a lot of pearls of wisdom, I also remember a lot of concert stories, I think he also played shoulder to the Genesis, of Ivan there are many things that will be missing, surely he was a kind of company, as well as a great musician, I remember always saying that if never had something bad happened would have had pleasure up there jammare with buddy rich, and was curious more than scared…
He held on to the end I know because until the day before I went to see him in the hospital.
A few years ago, for me he did this, on a random day when things just didn't go and I felt destroyed, I met him out there "hello how's it going? I'm going to see Vasco at the stadium, come I'll pay the ticket too!" He insisted how important it was to go and see the concerts, telling me: "Study study but come and see what you have to do and only here in front of the stage you will see it… if you want to make a career it's important." Well, it brought me luck because a short time later I said to myself to do and I found myself face to face with the beauty of 11,000 people.
He was a fan of Virgil Donati and Planet x.
I still remember when he placed the double pedal on the ahahah nomads, and he was strong.
He played with a lot of bands, even recorded metal never disdaining funky and fusion in general.
He will miss me and his family a lot. I sincerely hope that you do not miss the traces of his heart playing …."…"you have to sweat you have to sweat" he told me "only with dedication you will get to do something right". He was a great indeed he is a great! And he knew how to do groove.
Max Gordiani

DAVID, C.
I don't know Ivan Gheller much, but I would like to write a thought to remember him.
When I was about 18, I went to the rehearsal room and saw them for the first time. I was astounded by the precision and power he had in playing and every time I saw him I would stop and watch him trying to "steal" something.
By chance one day at a clinic of Ian Paice (in 2008 in Collegno if I'm not mistaken) I met him and exchanged thoughts about what we had just heard and seen done by the mythical Ian.
The thing that struck me about Ivan was his humility in talking about one of the greatest drummers in history and I think it's hard to find good drummers who don't "put their heads up."
I asked him if maybe when he was in the rehearsal room I could come in and watch him and listen to him closely, his answer was: but we would miss a couple of chopsticks that we have fun and play a little together…
I was happily impressed, because from a person who has known each other for a few minutes you do not always expect such a welcome…
Unfortunately for various commitments I stopped playing and that was the last time I saw Ivan Gheller.
About a year ago I started playing again and tried to get in touch with him in various ways but without being successful, I wanted him to give me drum lessons I saw in him a perfect master…
Yesterday, 11/9/2013 after several attempts I learn of her disappearance…
We weren't friends, certainly if I met him maybe he wouldn't remember me, but the news of his passing struck me.
Reading other dediches I had the confirmation of my feelings, as well as a great drummer was a great person and you could see that he loved music deeply…
I wanted to express my thoughts…. I carry with me that small but pleasant memory I have of him…
David

IF you want to write A SALUTO or A TRIBUTE ON IVAN, OR MANDARE OF YOUR PHOTO WITH YOU, SENT THE ALL to INFO@GMDRUMSCHOOL.COM AND THE ALL OUTERED ON THIS PAGE.